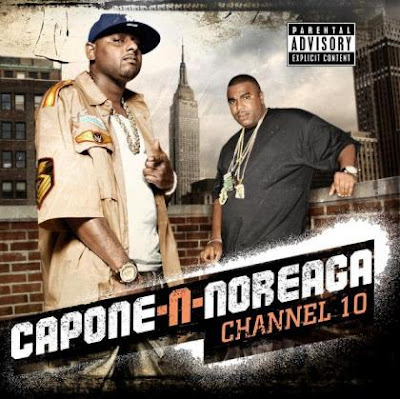 I'd like to welcome you to our inaugural review, and who better to set it off with then the mighty Queens duo Capone-N-Noreaga. The road hasn't been a smooth one for CNN, ever since they burst on the scene with their classic 1997 debut "The War Report". Capone was imprisoned prior to the release of "The War Report" and keeping with tradition he was also incarcerated before the release of their follow up "The Reunion". Capone's legal troubles gave birth to Nore's solo career which was received well commercially. His 1998 solo debut "N.O.R.E." went on to sell over a million units, followed by gold plaques for "Melvin Flynt - Da Hustler" & "God's Favorite".

Along the way there have been East Coast/West Coast wars, Hot 97 shoot outs & even a failed attempt to infiltrate the Reggaeton market. Capone-N-Noreaga have definately earned their stripes. Regardless of all their trials and tribulations they somehow managed to survive the trenches and now they're back still reporting.

Lets get one thing out the way, if you're expecting another "War Report" do us all a favor, get a gun, put it in your mouth, and just shoot yaself. All you emotional internet babies talking about "we miss the nineties" need to just off yourselves already.

Setting things off we get the classic Cable News Network drop "This is CNN" leading into a montage of past hits. First cut on the album is the slow flower "United We Stand". You would expect something more uptempo but this actually works well. They ride the track like the veterans they are and show these new age rapid spitters that sometimes less is more. Next up is the sonic Ron Browz produced "Rotate" ft. a supercharged verse from another veteran Busta Rhymes. You can't front on this joint, shit knocks. "Talk To Me Big Time" comes blaring thru the speakers with some Scarface-esque strings and Capone-N-Noreaga trade bars back n forth like only a select few in the game can. "Bring It Here" comes in w/ "one shot two shot three shots four....". Kind of has the same vibe as the previous song maybe they should've combined the two.

Premier saves the day with "Grand Royale". This beat is sinister. Classic head nod shit. "The Argument" is probably the most genuine cut on the album. I remember when this song leaked people said they weren't feeling the beat. I think it has a nice vibe, video is hilarious too.

"Mirror" has Nore on the hook with a Tupac-esque cadence. Creative track digging the beat, "I saw death around the corner while slinging the yay/ so I got a little smarter and went the opposite way" word, I hear that. "Wooble, Wobble" yeah this is what we've been waiting for. That classic Queens sound, doesn't dissappoint.

This album really surprised me I guess my expectations weren't too high. There's a lot of bangers on here like the SPK produced "Channel 10" and one of the hardest beats I've ever heard in the Alchemist produced "Follow The Dollar". I was expecting my first review to be a "3 Borough" rated effort, but ladies and gentleman "Channel 10" is a "Certified Street Banger".